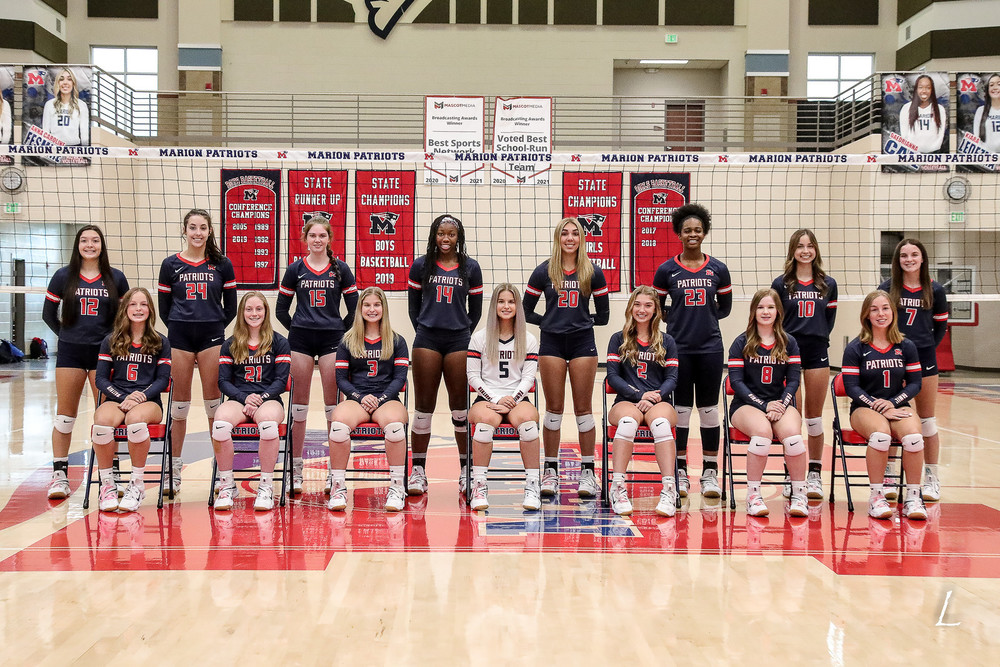 For one set, it looked like the Marion Patriots were going to play for a state volleyball title for the first time since 2016.

A massive home crowd at Fidelity Bank Arena was in full throat celebrating a dramatic 25-23 Marion victory in the opening set of the state semifinals.
Instead, the Benton Panthers (26-4 overall) ended Marion's season, winning the last three sets (25-15, 31-29 and 25-21) to advance to the final on Saturday afternoon at 2 p.m. Benton will play Little Rock Christian.
Marion's (27-2) first home loss of the season snapped its 27-game winning streak.
Nine Marion seniors played their last game against Benton. Senior team captain Anna Caroline Fesmire capped her career by recording 15 assists, logging four kills and serving three aces. Arkansas-Little Rock commit Daedrianna Cail, who surpassed 1,000 career kills earlier this season, stacked a team-high 16 kills, blocked four Benton kills and served a pair of aces. Fesmire and Cail started four years for Marion's varsity team. Setter Lauryn Keith handed out a team-high 17 assists and tallied two kills. Libero Madison Keith handled a team-high 33 digs while Emerson Miller handled 14 digs. Kora Wilson rolled up 18 digs and logged four kills. Kiara Ledezma and Riley Jackson logged a pair of kills.
“Obviously, I'm devastated for our seniors. I wanted this so badly for them,” said Marion coach Lisa Beasley. “This ending isn't what any of us wanted, but this year has been the most fun I've had ever had coaching so far.”
Senior Arkansas State commit Laci Bohannan paced Benton with a team-high 21 kills, and ranked second with 13 assists. Sophomore Abigail Lagemann pounded 20 kills and served a pair of aces. Kenzie Garrett paced Benton with 26 assists.
“I thought Laci and Legs (Lagemann) just came through from the outside all day long,” said Benton coach Michelle Shoppach. “The thing we kept telling our setters to do was get the ball high so we could hit over the block because they (Marion) can really block the ball.”
Benton led 21-19 late in the first set as Marion called for time. A Fesmire ace and a Rucker kill got the Pats even at 21. Marion took advantage of a Benton hitting error and a Cail block gave the Pats a 24-22 lead before a Wilson kill gave Marion a dramatic 25-23 opening-set conquest.
Benton knotted the match, leading wire to wire en route to a 25-15 victory.
The third set was pure theater as Marion and Benton went back and forth, neither team able to claim more than a three-point lead. Marion led 23-21 in the third set following a Jackson kill as Benton called timeout. Benton ripped off three straight points for a 24-23 advantage, but the Pats responded with kills from Fesmire and Cail to push back ahead 25-24 to set up game point. The Pats led 29-28 after a Lauryn Keith-to-Rucker connection but Garrett lofted assists to Bohannan and Lagemann before a Marion hitting error gave the Panthers a crucial 31-29 victory in set No. 3.
“We could have put the third set away and maybe this conversation is different,” said Beasley.
Marion didn't back down in the fourth set, claiming the lead nine times, including 18-16 following a Rucker block. But four straight Benton points gave the Panthers a 20-18 bulge and forced a Marion timeout. The Pats got within 22-21 before Bohannan turned a pair of Garrett passes into assists, and the Panthers advanced when a Marion kill attempt went into the net.
“We did so much to be proud of this year. We won a lot of games, we were undefeated in conference, and that's never easy to do,” said Beasley. “All there was left for us was to win a state championship. We didn't do that, but most teams don't get to do that. I'm just so proud of this group, and I love them.”