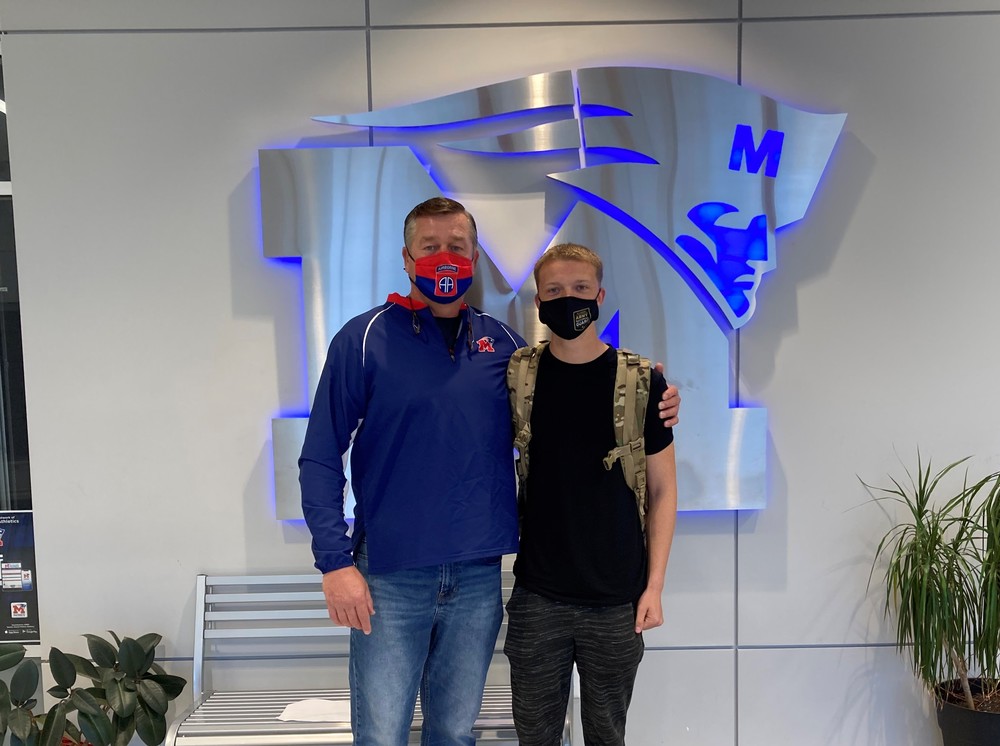 Veterans Day is a special event for anyone who has served in the armed forces, and that's no different at Marion High School. But for MHS student David Helms, the holiday took on some added meaning. Helms is one of only a few students in the state to complete Army basic training before his final year of high school.

Helms attended basic training last summer in Fort Benning, Georgia, and “it was super hot,” said the senior. “I shipped out in June, and it's not even just that it's hot, it's extremely humid. It rains just about every day.”

After a short processing period, Helms began Red Phase, which is the first three weeks of initial entry training. That's where trainees learn about U.S. Army heritage, Army core values, as well as undergo physical and tactical training. One of the more significant tests trainees face is the Physical Endurance Course.

“It was terrible,” said Helms. “It involved getting yelled at, and smoked a lot.”

Helms easily completed Red Phase before moving on to White Phase, also known as the Rifleman or Gunfighter Phase. That's where trainees focus on developing combat skills, with special emphasis on weapons and physical fitness training. Helms learned how to identify, track, and engage targets with a rifle.

Next was Blue Phase, which “was my favorite phase,” said Helms. “We got to throw grenades. We did live fire. We did land navigation, day and night. We got to shoot grenade launchers. It was a blast.”

Helms was impressed by his commanding officers at Fort Benning.

Helms' interest in the armed forces started at a young age.

“Everyone played those games as a kid where you pretend you're in the Army, running around with a stick, and pretending to shoot,” said Helms. “I've always loved Call of Duty and games like that.”

Helms, who also runs cross country and track at MHS, took his ASVAB test last year, which is when the Army's recruitment of him began. He said he's considered going active duty down the line, but would have to evaluate that when the time comes.

Helms will return to Fort Benning next summer to complete his advanced individual training (AIT).

“For me, being an infantry guy, it'll be a lot of shooting, land navigation, and a lot of rucking,” said Helms.

Helms is still weighing his military options for after graduation and is also considering enrolling at Arkansas State University to study criminology, so that he could become a detective.

“I like helping people, and if there's one thing I can't stand, it's probably just bad people in general,” said Helms. “Helping punish bad people who do bad things makes sense to me.”